The only thing we have to fear, is Fear Itself

And Schism. We mustn't forget Schism. At the Xmen panel [IIRC] at San Diego Comic Con, one of the audience members asked about a bunch of images that had been used to market for Fear Itself. Specifically, the person was asking about this image of Cyclops: 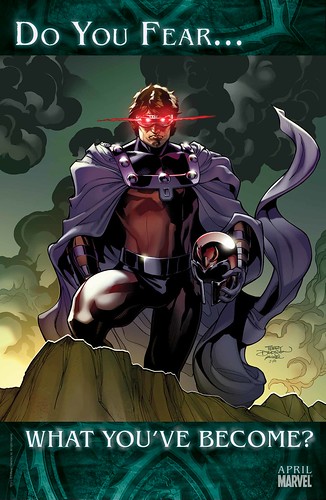 The response given was that "the Marketing department just put out a bunch of images that looked interesting". At a different point in the panel, it was brought up that the whole Schism arc was about who become Xavier's successor, and whom would be Magneto's.

When Schism started, it started to read very heavily to me that Wolverine - not Cyclops - was going to end up Xavier's successor. Considering that Wolverine left SF to start up the East Coast Xmenrebuild Xavier's old school, I'd say that the promo "just put together by Marketing" was definitely a ruse.

It's an interesting concept, and it's not out of the blue. Logan's always mentored the younger students (first Kitty Pride, then Jubilee, then Hisako Ichiki). He's always been protective of the younger generation, and Scott... he seems to have forgotten that people are anything more than soldiers. I'm finding it telling/fascinating that, according to the cover art, Bobby & Hank are on Wolverine's team - not Scott's. Warren is missing from the cover art; however, considering how batshit crazy Warren's gotten recently, I'm not sure his endorsement - or lack thereof - of Scott would mean anything.


The whole Regenesis storyline might suck, but it's gotten me intrigued for now. I just wish they didn't feel the need to reboot Uncanny X-Men back to a #1. I don't have any particular attachment to the numbering system that Marvel's been using, other than the fact that it makes it easy to know what issue comes next. It frustrates me to no end these endless re-numberings, which makes it difficult to go back to one's collection and reread things in order.

This entry was originally posted at http://merhawk.dreamwidth.org/486277.html. Please comment there. If you don't have a DW account, you can use OpenID, or ask me for an invite code (if I know you/know of you). I might have extras.
Tags: comics, marvel comics, pictures, x-men
Subscribe
Comments for this post were disabled by the author